National Advocates for Pregnant Women (NAPW) seeks to protect the rights and human dignity of all women, particularly pregnant and parenting women and those who are most vulnerable including low income women, women of color, and drug-using women.  NAPW uses the lessons learned from the experiences of these women to find more effective ways of advancing reproductive and human rights for all women and families. Our work encompasses legal advocacy; local and national organizing; public policy development, and public education.  NAPW is actively involved in ongoing court challenges to punitive reproductive health and drug policies and provides litigation support in cases across the country. NAPW engages in local and national organizing and public education efforts among the diverse communities that are stakeholders in these issues, including the women and families directly affected by punitive policies, as well as public health and policy leaders.

By focusing on the rights of all pregnant women, whether they seek to have an abortion or go to term , NAPW is broadening and strengthening the Reproductive Justice and other progressive movements.  NAPW recognizes that 61% of women who have abortions are already mothers and 84% of women by the time they are in their 40's have become pregnant and given birth. We believe that you cannot have a culture of life if you do not value the women who give that life.

For many years, the pro-choice movement has been criticized for its overwhelming focus on abortion issues and for failing to be more inclusive. Abortion is the defining women’s rights issue for many women because the ability
or inability to control pregnancy means the difference between full participation in society or not. But for poor women and women of color, the ability to end a pregnancy is most likely not the factor that determines their ability to be full and equal participants in our society. Rather, for them, salient issues include the ability to access health care and to have the opportunity to bring children into the world that they can love, support, and raise in a safe environment.  Moreover, more and more women are finding that they are denied informed decision-making in the context of birth and need to be fully part of the Reproductive Justice movement. Thus, there are many groups of women who are allied but for whom the right to an abortion is not the key to their reproductive and human rights.

By choosing to focus on pregnant women and the full range of attacks on their rights – including the efforts to establish separate legal rights for fertilized eggs, embryos, and fetuses under the law, to hold women criminally liable for the outcome of their pregnancies, and to expand the drug war to women's wombs, NAPW is  making new allies and building new strength from a broad based and integrated approach to reproductive and human rights.
Criminalizing Pregnancy: As Roe Turns 40, New Study Reveals Forced Interventions on Pregnant Women.  Democracy Now Interview with Lynn Paltrow:
http://www.youtube.com/watch?feature=player_embedded&v=vTXk1ecnoF0 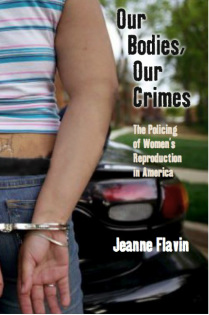